The Solemnity of All Saints, November 1, 2013 was a historic day: our Sr Christina became not only the first person to enter Tautra Mariakloster, go through the formation process and make solemn profession here, but also the first Cistercian nun to make profession in Norway ever (because it was monks on Tautra in the middle ages). 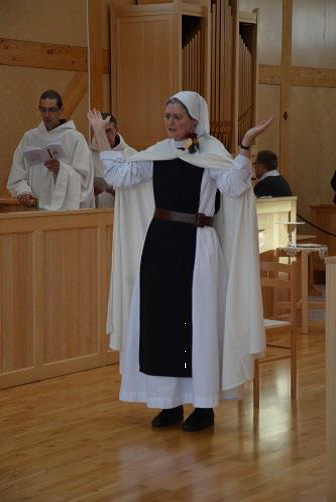 Elisabeth Anthonia Christina van Opzeeland was born in 1955 in Den Helder, The Netherlands. After she got her masters in philosophy, she worked as a philosophical consultant and as a manager in a big social security company in Amsterdam. 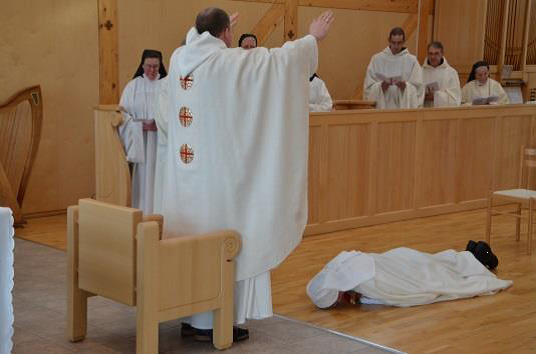 She has always been in search of a balance between being active and contemplative, being together and being alone, between silence and speaking. This quest led her at the age of 43 to give up her job and apartment and to work as a lay missionary of the Society of African Missions (SMA) in a Liberian refugee camp in Ghana (West Africa). There she for the first time in her life met very happy but materially poor Christians who had placed their whole life in the hands of the Lord. Christina loved the missionary work in Ghana, but she missed praying together in a community. For this reason, she joined 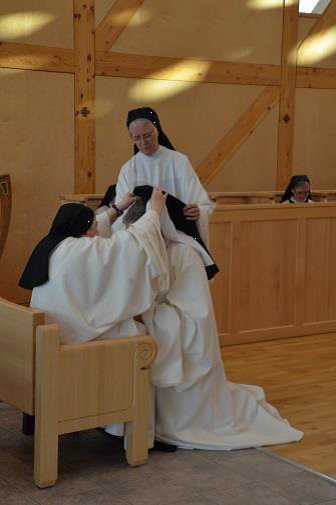 the active missionary Family of the Incarnate Word and was a missionary in Italy and in her own country the Netherlands. It was only during a sabbatical year at the Cistercian monastery Tautra Mariakloster on the island Tautra in Norway that she became aware of her deep yearning for the contemplative life. Especially the Cistercian way of life gave her the balance between active and contemplative, and being together in community and being alone in the monastic cell.

Sr Christina herself designed the cut-out paper flame for the cover of her Mass booklet, with her prayer: Place, O Lord, in the depths of my being a Yes that lasts a lifetime as ever-burning fire. Many members of her family made the journey to witness Sr Christina’s final vows, and a group of exchange students from Kenya happened to visit our church this day, and sang a song in her honor. 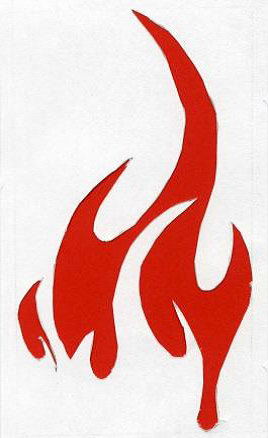 For several years Sr Christina has been our "cat mistress" and toward the end of our festive dinner, Fr Anthony presented her with a three-story cat castle, complete with a balcony and sunroof for our two new kittens. Tassel has a long tail, but Connie only a stub. They have given us a lot of joy as we watched them grow up in the garden between the soap department and our common room. Sr Christina’s many gifts are being put to good use as she is our new work secretary, coordinating the work of both the sisters and our volunteers. She is now also submistress of novices. 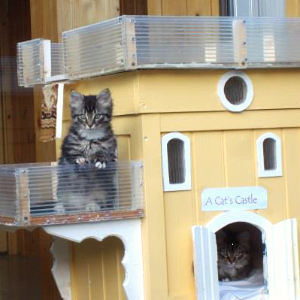 Just before Advent, we had our annual community retreat, preached by Dom Mark Ephrem, from the Olivetan Benedictine monastery Holy Cross in Rostrevor, Northern Ireland. It was just what we needed to refresh our spirits as we entered the season of preparations for Christmas. Dom Mark Ephrem has an amazing ability to juxtapose Scripture texts and bring out an original meaning. Some tidbits from the retreat:

Conversion is not a goal, but a way. It is a constant movement toward life. We leave behind our self-seeking pursuits.

Jesus came to heal. Healing is the result of repentance and faith. The root of sin is sickness. Many of us keep putting off seeing the doctor! What do we need healing of? Resentments, thwarted ambition, anger, inflicted wounds, not feeling appreciated, feeling misunderstood and rejected, criticism. When we become paralyzed by inner hurts, we are not able to be at the disposal of Christ. How can we be healed? We need an inner, spiritual

healing, an evangelization of our depths. It starts with a humble admission of our brokenness. We are not in control of our woundedness, but what have we done with what has been done to us? Are we fixated in nourishing our victimization? Healing may begin with the grace of a truthful self-revelation to another. This lances the wound. Sometimes more radical surgery is necessary! 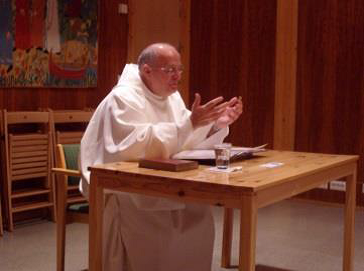 We celebrate the Solemnity of the Founders of Cîteaux, Robert, Alberic and Stephen, on January 26. In our diocese it is also the Feast of St Eystein Erlendson (1120-1188) who was the archbishop responsible for building Nidaros Cathedral and possibly 6 monasteries in Norway. This year on January 26, our longtime friend and one of the first members of our support group, Egil Mogstad, was ordained a priest in Nidarosdomen. It was the first Catholic ordination in the now Lutheran cathedral since the Reformation.

Egil had been ordained a Lutheran priest in Nidaros Cathedral 40 years before, in 1974. He converted two years later, and after serving many years as a guide in the Cathedral (he is perhaps the person who knows most about Nidaros) and a teacher at the Trondheim Cathedral School, he was ordained a deacon at Stiklestad (the place of St Olav’s martyrdom) last summer. He celebrated his first Mass in our monastery church on January 27 and gave each of us his first priestly blessing. Another historic occasion, making visible the close bonds between Lutherans and Catholics in Trondheim. 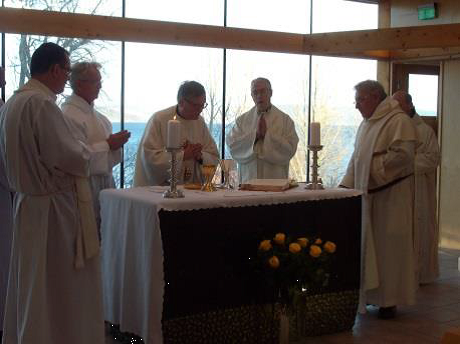 This month our soap department is arranging two workshops for our customers who resell our products. About 15 interested people eagerly filled the places available. First they helped to cut a 56-kilo block of soap that had been made two days before, into bars—some destined for the medieval market during the St Olav festival this summer, some to be packaged and boxed for sale at stores and to individuals. Some of the group watched our postulant Hilary pour balsam into rows of tins, and after the midday meal the course participants were able to experience pouring The Queen’s Soap themselves. 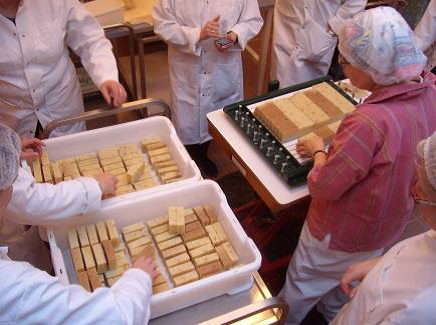 Sr Hanne-Maria also told some of the history of our soap department: how it all started with Sr GilKrist’s favorite flower, lavender. Her interest in making soap became a hobby at Mississippi Abbey, and when she was named as one of the foundresses for Tautra, the sisters wanted to see if making soap could be their main industry. The first batch of soap was made just after Easter, 1999, on a single burner we had found at Salvation Army. Fourteen years later we usually sell for 1.5 million kroner a year, and are able to cover a good percentage of our living expenses, with the help of many like those who came to the soap workshop. 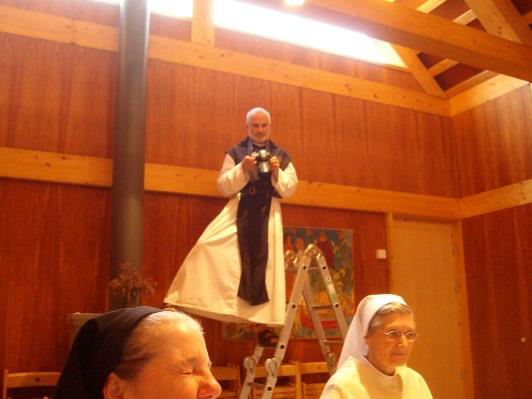 Br Martin of Mount St Bernard in England went to great heights to take photos of the community. 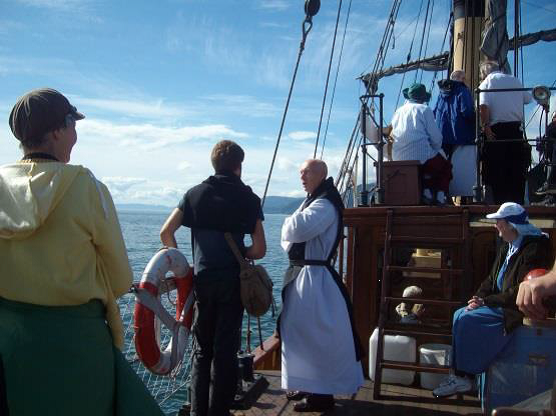 Fr David Lavich of the generalate enjoyed a sail around Tautra on the Hansteen, an historic steamship, while he was substituting for Fr Anthony last summer. 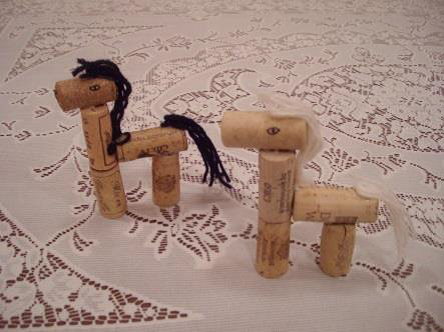