Exult, all creation around God’s throne! 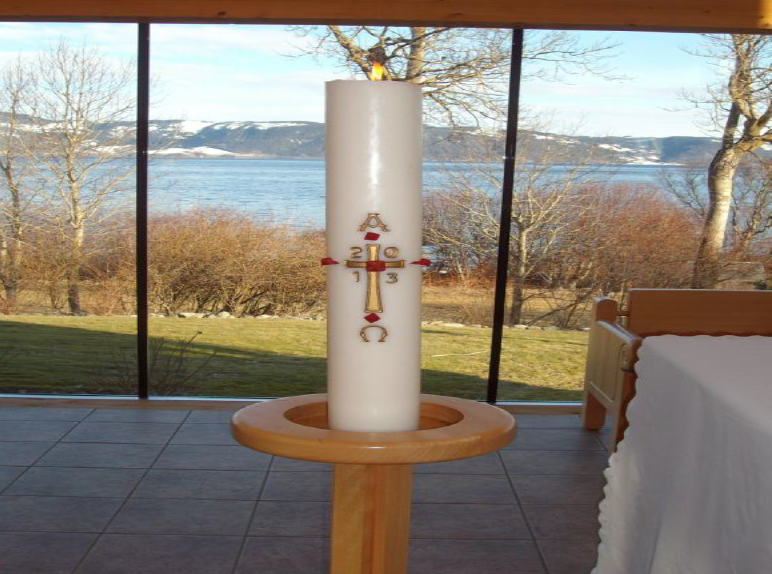 Our paschal candle is a gift from Fr Dexter Brewer and is the same design they use at Christ the King parish in Nashville, TN. We like having this connection across the ocean.

It’s been a long, colder-than-usual winter, but the irresistable force of new life is swelling the buds on the trees and pushing snowbells up through the still half-frozen ground. Easter came early this year and we had to have both the Palm Sunday procession and the lighting of the New Fire and Paschal Candle indoors. But some early forsythia and the gift of two flats of yellow ildtopp dictated that our Easter color scheme would be bright yellow and a deep spring green, spreading the joy of the resurrection of Jesus and the renewal of the whole earth.

We had fewer guests this year, partly because of the weather and partly because we have been doing some renovating of the red guesthouse and the work was not yet finished so rooms were not available. Our Munkeby brothers joined us on Good Friday, and Sr Ina was also here for Holy Week, so we had a full choir. It is always a challenge to prepare and practice the special music which is sung only this once each year, and some of us are finding it more and more difficult to get up after the full prostration we make to adore the Cross, but the solemnity and the deep meaning of these holy days always gives us new energy. That’s the beauty of our liturgy: it’s a vehicle we can get on, which carries us to a place of worship and adoration, regardless of the tiredness of our bodies or the independability of our emotions.

Actually, the fact that the celebration of the mystery of the Pasch does not depend on us, is a great gift of God’s grace. Dom Christian de Chergé, the prior of our community in Algeria who was martyred with 6 of his brothers (portrayed in the film "Of Gods and Men") said in a chapter talk on Holy Saturday: "In Jesus’ pasch, all is taken away, even the poor signs which we want to give to his dead body! Useless the new tomb. The dead himself has disappeared! And it is useless to search for him. Even faith is poor when faced with the evidence: He is not here! Fear, confusion, poverty again of the witness when it does not point to anything: no one can give credence to what the women say. Poverty of the memory of Peter

and the others: they have forgotten everything. And poverty of intelligence which does not understand anything. The first paschal experience is one of a lack.

"This is how we taste the poverty of the Kingdom. We have to be displaced, totally out of our element, to make room for the Resurrected One. We have the tendency to want to hold fast to him, in the joy of possessing the news. But no, he is no longer as he was before. He escapes from us…

"Easter is the great celebration of the hidden sense of the things of God. All of creation is wakened to the life of God who holds it in his womb. In this immense infancy which is beginning, creation has to abandon all that she has, to discover at last what she is. She must let herself be fashioned anew, in the shadow of the Holy Spirit, much more than in the days of her genesis.

"The great architect of this revolution is the Spirit whose proper joy is to have nothing proper, to be nothing except pure gift, in total dependence on the one who receives it: in the manner of fire which waits for something combustible in us to communicate itself, in the manner of water which looks in us for a channel in which to circulate. The poor know this: because they have nothing, they are at the disposal of the grace which comes."

There is new life in the Frosta parish as well: for the first time the Church of Norway (Lutheran) hired a woman priest to be our local pastor. Her name is Kristin Mørreaunet, and she was just ordained at the end of February. She is married and has an 18-month-old daughter. We look forward to experiencing a female pastor and continuing our good ecumenical relationships with the Christian communities in our area.

S Rosemary came home from her sabbatical year on March 2, just in time to celebrate her 75th birthday on March 3. The community fêted her at the noon meal, and sponsored a secret supper party with some of her closest friends. 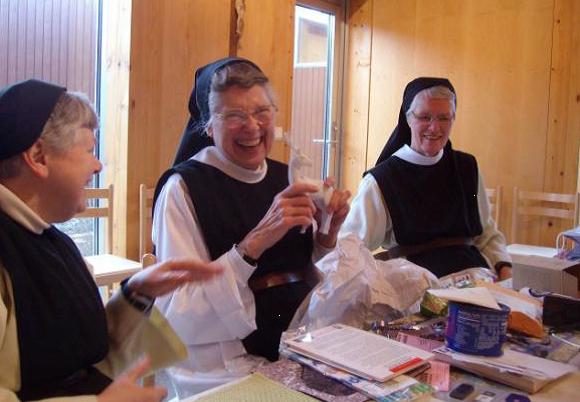 Then on March 4 M GilKrist (prioress), S Lisbeth (delegate) and S Sheryl (secretary) left for Mount St Bernard Abbey, Leicester, England, where the Region of the Isles regional meeting was held March 6-11. The various regions of the Order meet once every 3 years to prepare for the General Chapter, also convened every 3 years, to take up questions and situations which concern the whole Order. The Region of the Isles is comprised of 12 monasteries: 6 in Ireland, 1 in England, 2 in Wales, 1 in Scotland and 2 in Norway.

Our sisters returned home just as Pope Francis was elected. The whole community gathered around a large computer screen and waited with the entire world for the announcement of Cardinal Jorge Mario Bergoglio’s election. We immediately googled him on another computer and rejoiced to learn that he is an Argentinian, a Jesuit and a champion of the poor. We remain impressed with his simplicity and humility and are very hopeful for new life in the greater Church as well. Ad multos annos, alleluia! 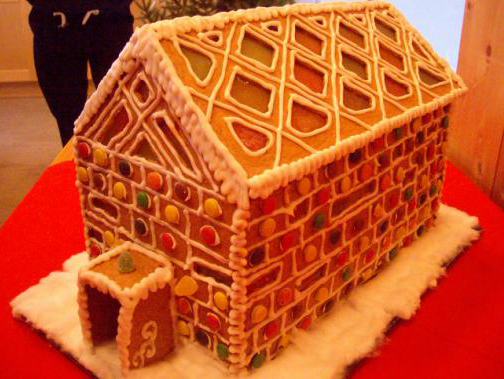 Our volunteer Runa baked a gingerbread model of our church! 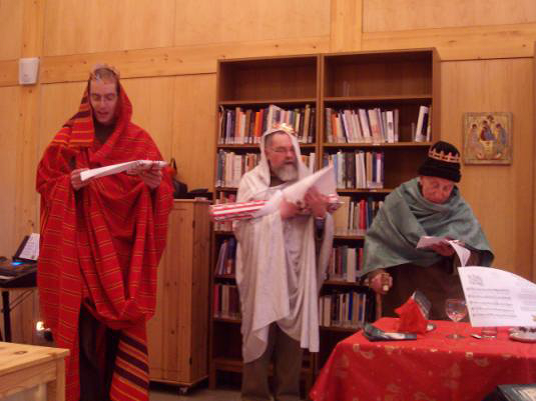 On Epiphany, M GilKrist’s feastday, we were visited by three holy kings who came not from the East but from the North (Munkeby). 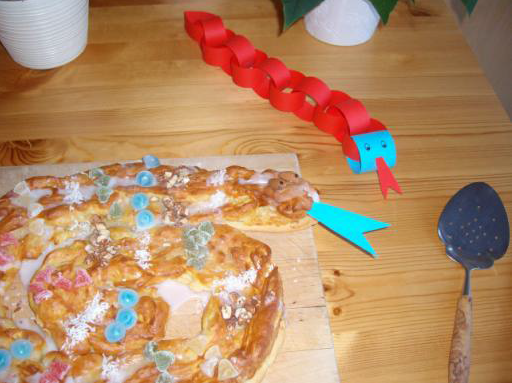 Since our novice S Eleanor is from Shanghai, we celebrated Chinese New Year with snakes in several forms, some of them edible. 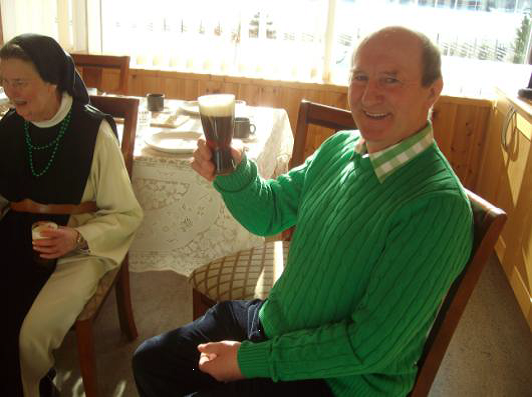 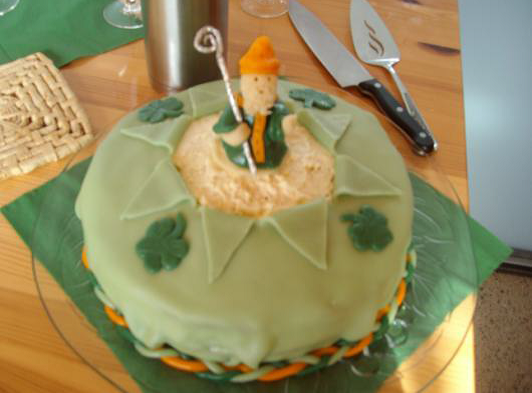 Our Irish chaplain Fr Anthony can count on Irish coffee on St Patrick’s Day. Runa made a special cake with a marzipan St Patrick on top! 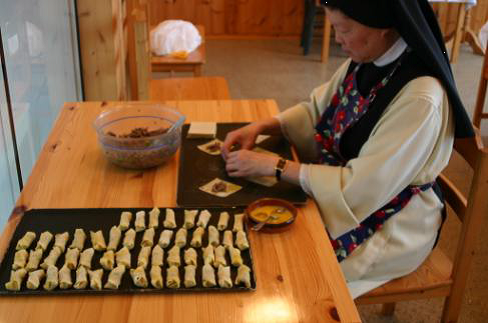 S Sheryl making mini eggrolls which are included in her monastic cookbook, to be published later this spring. Ordering info will be included in the next Tautringer and on www.tautra.no. 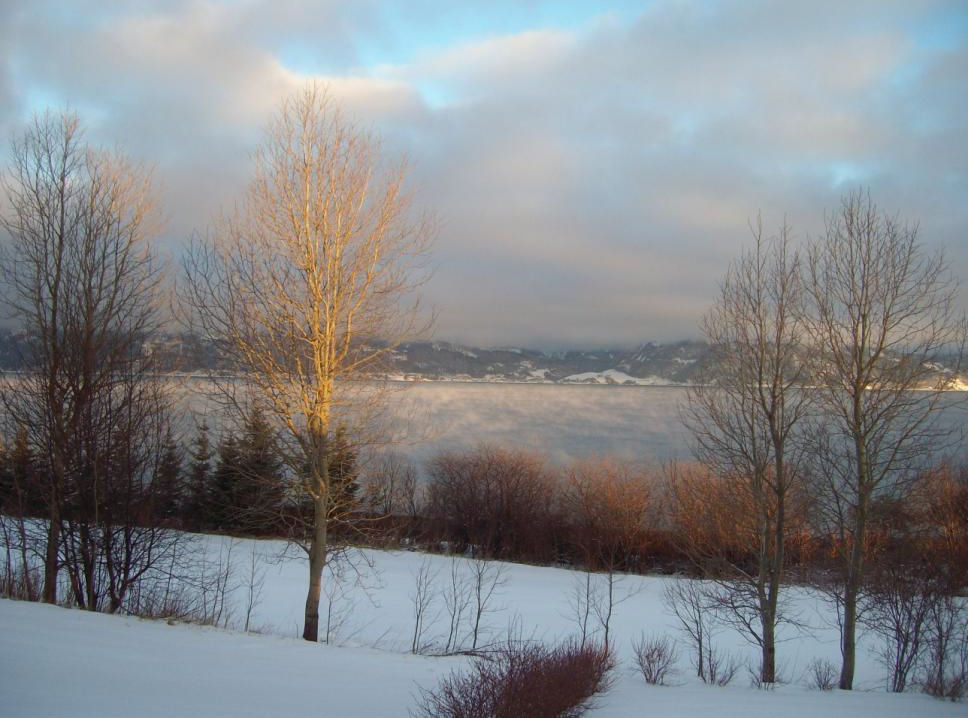 The morning after the papal election, we had our own "white smoke" over the fjord. 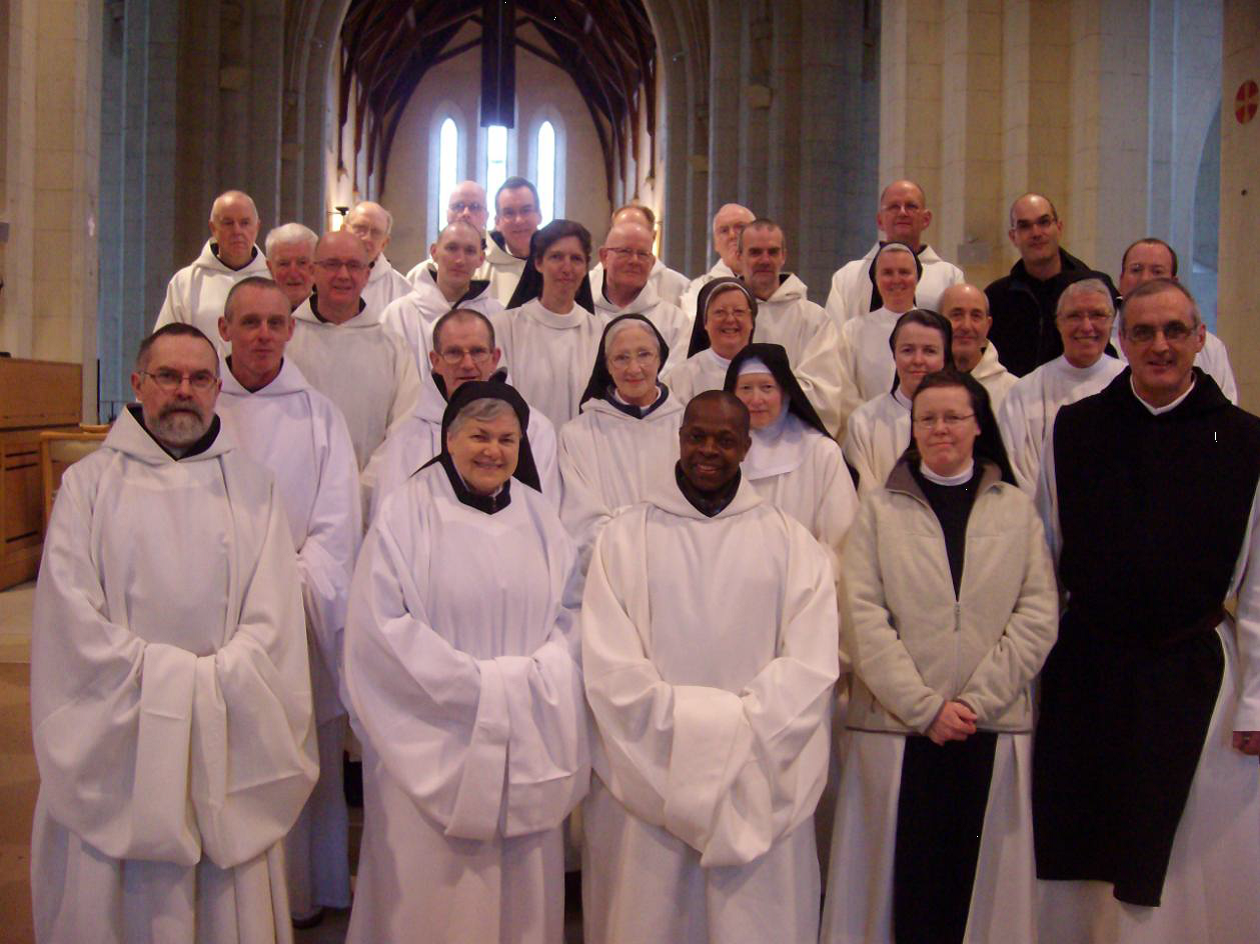